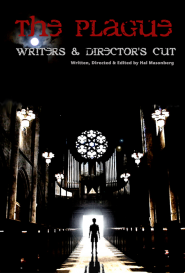 The as-yet-unreleased cut of the film THE PLAGUE. This cut represents the intended creative vision of the writers and director. A dramatically altered version — not approved or supported by the film’s writers, director, cinematographer or cast — was released by Sony Screen Gems in 2006.

The behind-the-scenes events surrounding THE PLAGUE are a direct inspiration for the creation and formation of Off Leash Films. THE PLAGUE, originally produced and intended to be a film that spoke to an audience seeking both a visceral and thought-provoking experience, unfortunately fell into the hands of those for whom such desires and intentions were either of no interest or too daunting to see through to completion. The film was eventually released with our names attached, but our story butchered and our vision altered to such a shocking degree that it became precisely the type of film it had originally been created as an alternative to. The film no longer appealed to nor engaged its intended audience, but instead resembled so many other indistinguishable films that were already out there in disproportionate abundance.

The tale of what happened to THE PLAGUE, however, is not a new or unique one. Consider the advice and impression of one of the single most successful film producers of all time, Irving Thalberg. Thalberg was made head of production at MGM in 1925 and in just three short years turned MGM into one of the most successful studios in Hollywood history. He remained in that position for 12 years until his early death at age 37. His insights and observations are as relevant today as they were over 70 years ago:

“The producer beating a new path for himself through the wilderness is going to do the thing ‘differently,’ of course. But after a while, he looks about him. The territory is unfamiliar, the forest ahead forbidding. Just how ‘different’ dare he be? He looks at his resources, and then at the established successes of the past. He suddenly realizes he must play safe, be sure. The unknown is a gamble; the known isn’t—at least comparatively. The safest plan, obviously, is to follow the trailblazers. So he produces an imitation of one of the current successes. Usually it is a mediocre imitation.”  –Irving Thalberg

James Van Der Beek (Dawson’s Creek, Varsity Blues), Dee Wallace (E.T. The Extra-Terrestrial, The Howling) and Ivana Milicevic (Casino Royale, Love Monkey) star in this supernatural thriller about a world on the edge of extinction. In one horrifying and unexpected moment, all children across the globe — those under the age of nine and all those born from that day forward — fall into a deep catatonic state. Tom Russell (Van Der Beek) returns home to a small New Hampshire town after 11 years in prison to find the world he left behind and the people he once knew changed. What proves to be a difficult homecoming soon turns terrifying as the children of the world, after a ten-year incubation period, suddenly return to consciousness. And with them they bring an incomprehensible and violent fury for which Tom, and a handful or townspeople cut off from the rest of the world, must not only fight to understand, but to survive.

Go HERE to read the dozens of international articles and reviews written about THE PLAGUE: DIRECTOR’S CUT and the cautionary tale that is its backstory.

Directed and Edited by
Hal Masonberg